Today marks the final Blogtember prompt. While I haven't taken part every day I have really enjoyed pushing myself to post far more frequently than I otherwise would have, many thanks to Jenni of Story of my Life for hosting, I can only imagine how time consuming it has been!

And so today's prompt is...Share a photo of something old. Tell us about why its special.

Firstly, excuse the photos! They were taken in a dark room on my phone...hopefully the descriptions will help! This is my memory box... 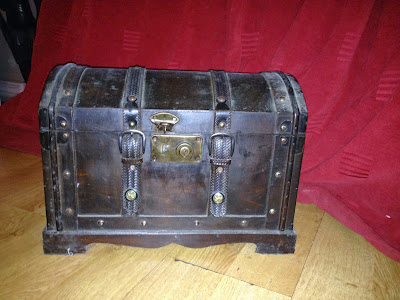 It was given to me by my Auntie about 10 years ago. It was originally a chocolates hamper, sadly they were long eaten before the box came to me but I immediately started to fill it with mementos and cards. Its almost full now, every so often I look through and have a clear out of those items that seemed so important years ago, but no longer hold such meaning. Three of the largest items though will never be taken out. Here they are... 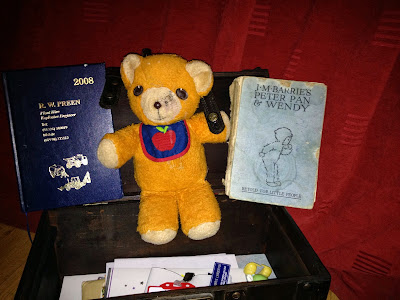 The orange bear was originally my brother's I think. If you squeeze his tummy he squeaks, even after 35 years (that's a lot of squeaks!). He reminds me of the time we lived in our first family home, before our parents divorced. He reminds me of my brother and the relationship we had as children. The black marks on his nose are where I got pearl nail varnish on him and my brother tried to scrub it off with a dirty cloth! 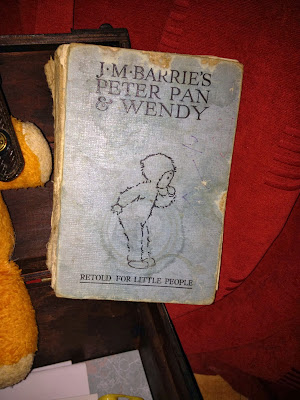 The Peter Pan book is the only possession I have of my Mum's. We had an unusual relationship with our mum. When our parents were divorced she moved back to London to be with her family and we had very little contact with her until she passed away when I was 18. She had quite sever mental health issues throughout her adult life which meant that is was difficult to spend time with her and she had very few sentimental possessions. Because of this we only have a few photographs and this book that was given to her on her first birthday. As a child I would read this book constantly and although it is battered and torn, I hope to keep it for my children too. 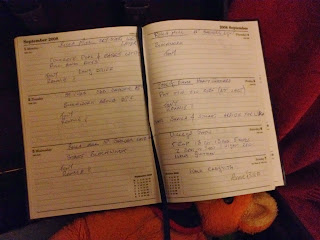 The diary from 2008 is my Dad's diary. He would mostly use these to log where he was working (he was a builder), what the weather was like and occasionally what he got up to outside of work. We were a family of stills photography rather than video so this is a really tangible thing that I have to remember my Dad by. I love flicking through the pages, seeing how most days there was just entries like "St Ives, odd shower", but then there would be the occasional mammoth entry like, "Village Show - 5 cups, 18 1sts, 13 2nds, 5 3rds, 2 Best in Show, 1 highly rec, Walked to Gwithian". That was my Dad...a man of few words!

It's interesting that of all the cards, newspaper cut outs, dried flowers, show stubs and other items in the box, the ones that mean the most are those that belonged first to someone else. Maybe it's not so much the item that holds my affection, but the memories of the people that they represent.