And so onto a new GBBO week and a new baking category - BREAD. My gran wasn't really a big bread maker. We were brought up on loaves of bread brought from a local bakery, sliced by a huge (and quite frankly scary) bread slicing machine that spat out our once unsliced loaf into a ready prepared bag and secured with a little plastic peg.

No the bread recipe that reminds me of my Gran is for something much more exciting than a boring white loaf - Lardy Cake. Famous in both the Northern and Southern most reaches of England, Lardy Cake takes a basic bread mix and adds lard, spices and fruit to turn it into a perfect afternoon bread. You only really get Lardy Cake in Northumberland, Hampshire and Wiltshire and although my gran lived most of her adult life in Cornwall, she was born and raised in Hampshire.

During school holidays my brother and I would often be taken to stay with relatives in Hampshire and this would be the sweet treat that we only had on these rare occasions, there really is no other bread recipe that reminds me more of my Gran.

Despite being called a "cake" it really is a bread, "Apparently, Northumberland lardy cakes are made with milk and currants, while Hampshire lardy cakes have no fruit at all. I’ve seen Wiltshire lardy cake made with various combinations of dried fruit and spices. Call it what you will, you can be sure of two things: plenty of lard but no cake. Lardy cake is bread." River Cottage Baking Recipes

I do have another sweet dough recipe lined up later in this series should "Sweet Dough" be a separate category.

To be a strict Hampshire Lardy Cake there should be no fruit, I have however added a small amount to my recipe, just because I like it that way. This isn't a bread that you can plough through guilt free in an afternoon, but the world would be a boring place without a treat or two in it.

This recipe is a slight adaption of Paul Hollywood's Lardy Cake Recipe.

Mix together the flour, salt & yeast in a bowl. Rub in 20g of lard using your fingertips until there are no visible pieces.

Add 3/4 of the water and hand mix the flour into the water to form a dough. Add as much remaining water as you need to get a dough that is soft and leaves the sides of the bowl clean (I used it all).

On a lightly floured surface knead the dough for 5-10 minutes, or until the dough is smooth. Place in a clean bowl, cover with clingfilm and leave to double in size. This will take 1-2 hours. While you are waiting for the dough to prove, mix the remaining lard, sugars and cinnamon in a bowl to form a light brown paste. Set aside.

Tip your dough onto a floured work surface and roll into a circle about 1/2cm thick. 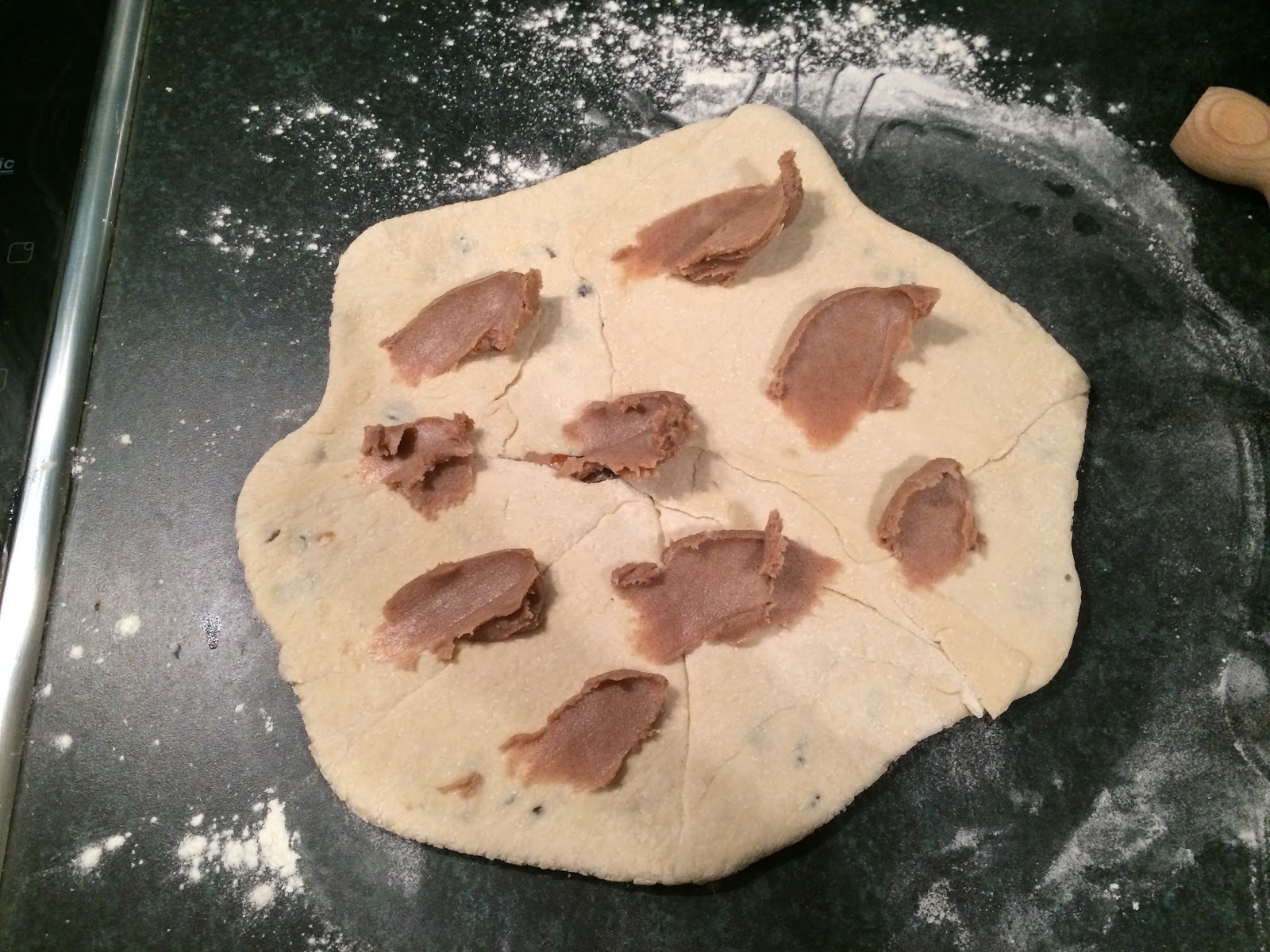 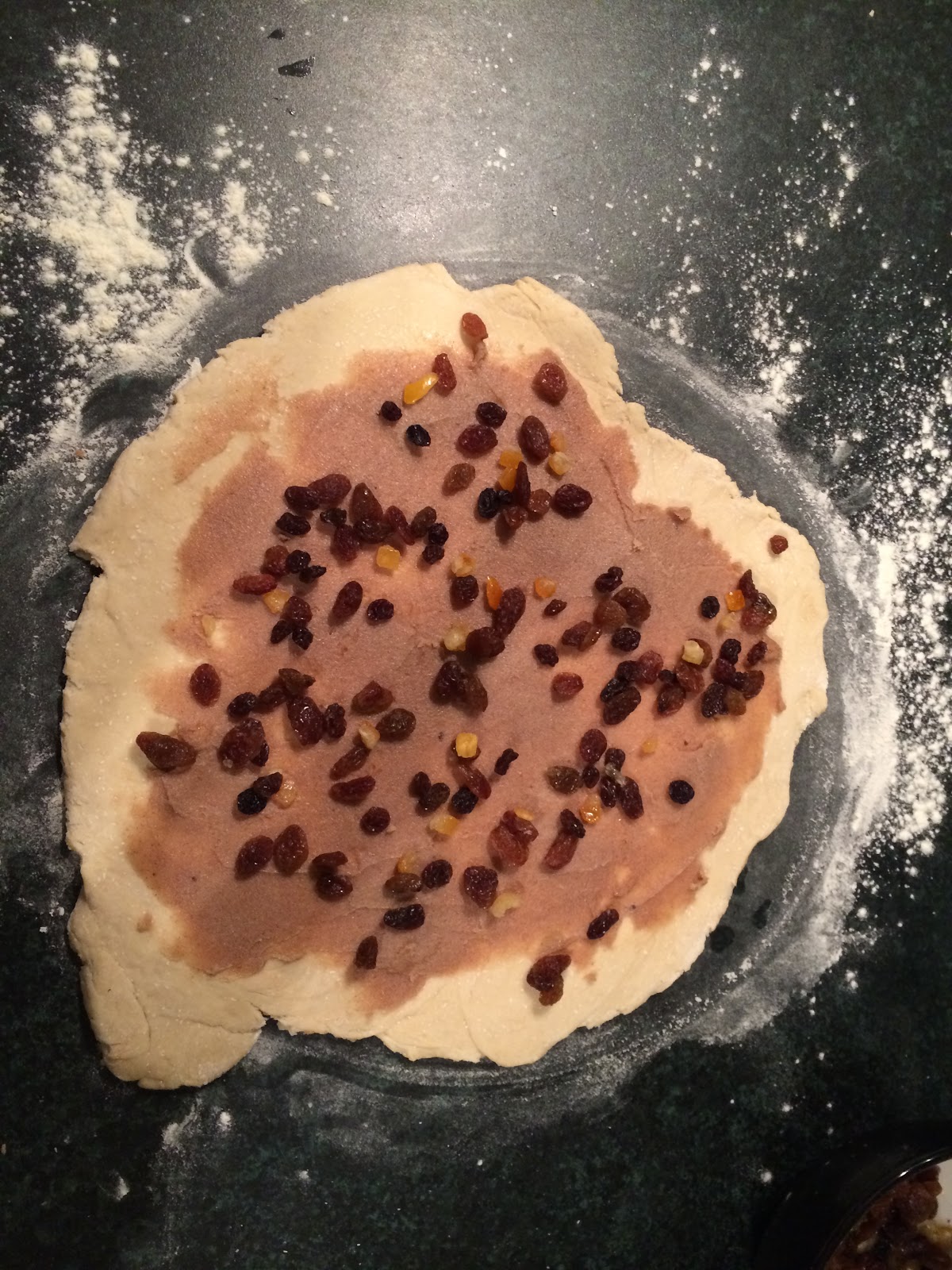 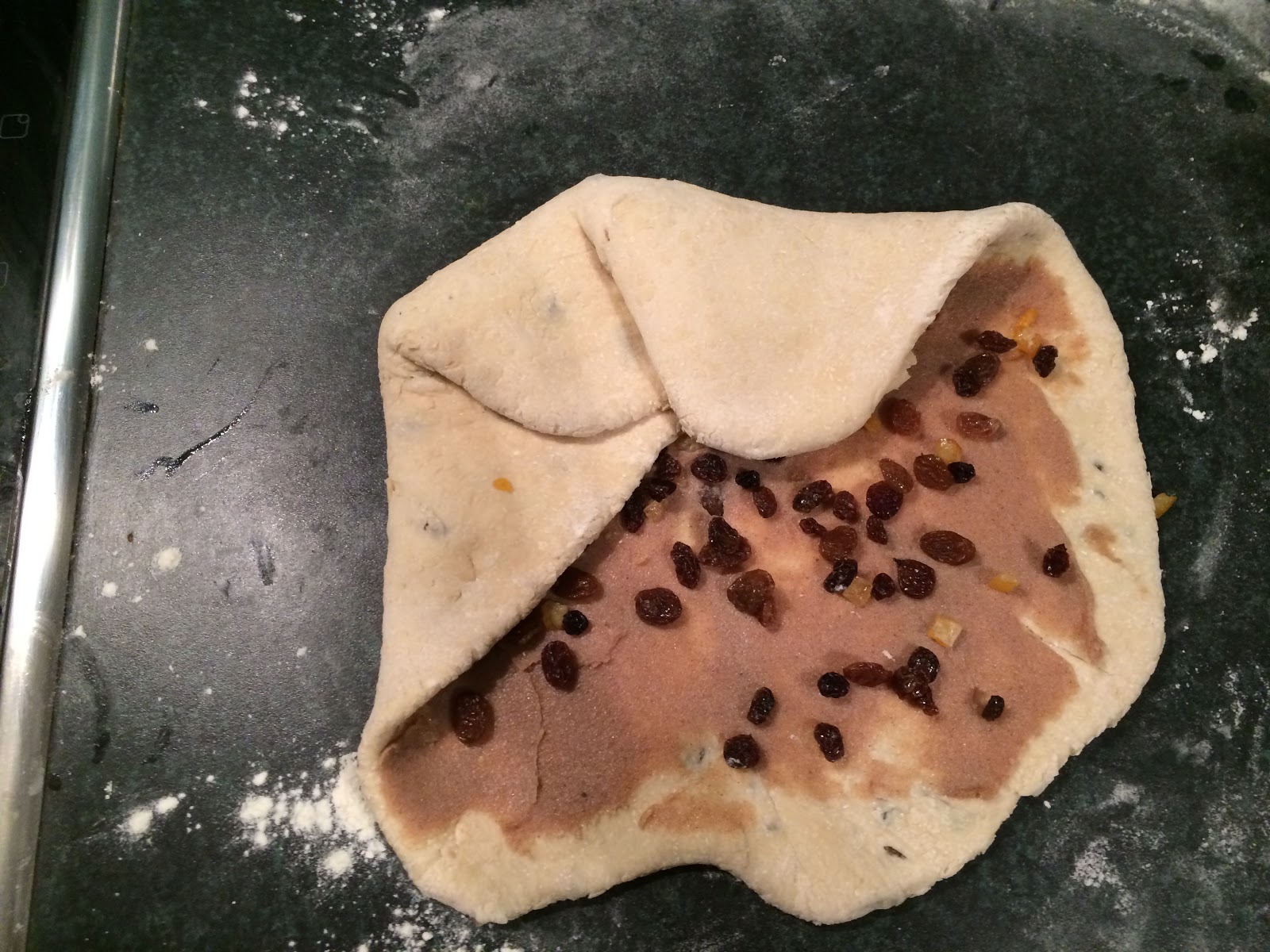 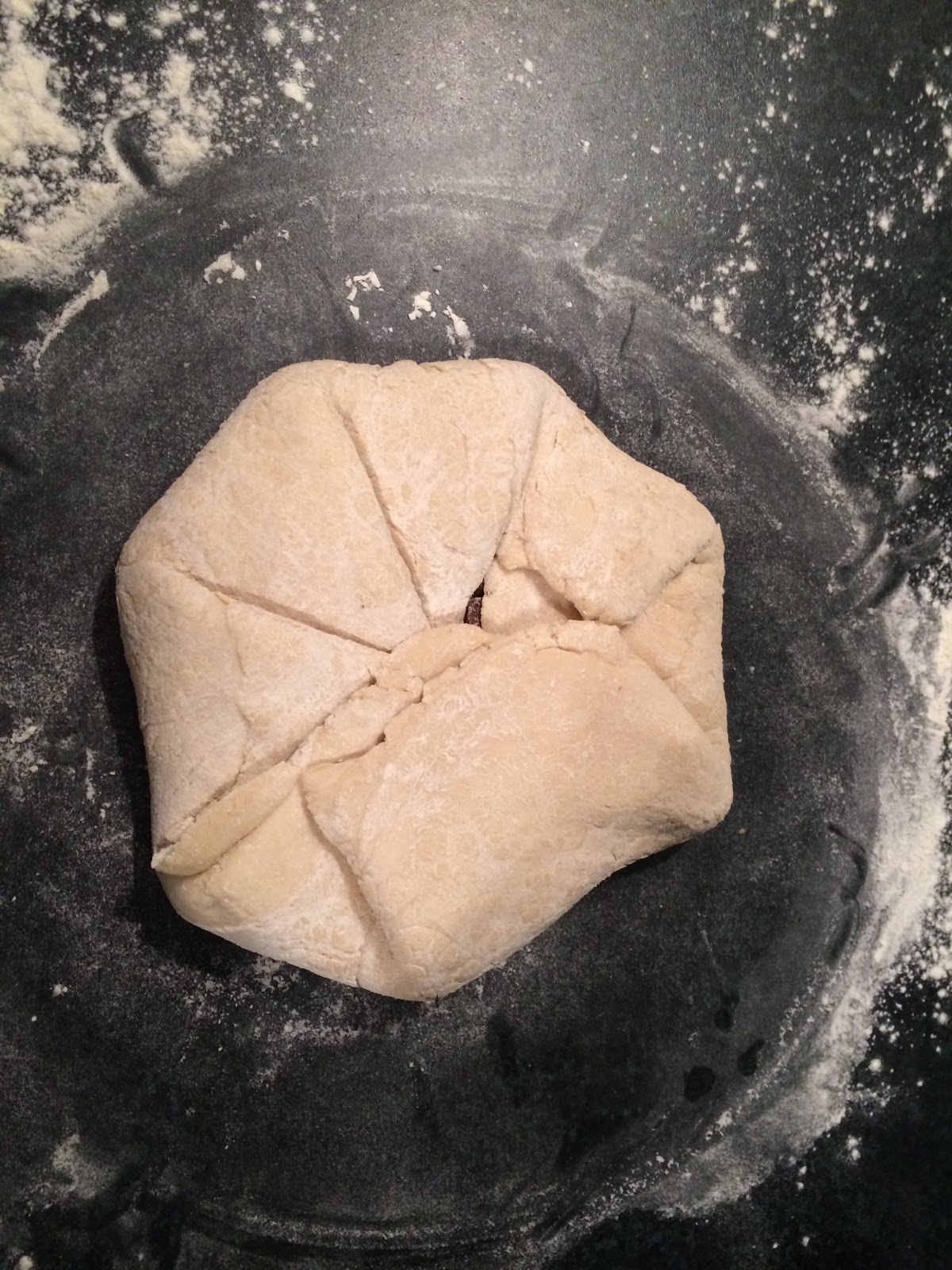 Line a round loose bottomed tin that your dough hexagon will fit in with baking parchment. Place your dough folded side down into the tin, cover with clingfilm and leave to rise for 30 minutes. Preheat your oven to 220C/425F/Gas 7.

Bake for 30-35 minutes or until golden brown. Leave to cool slightly before removing from the tin, sprinkling with caster sugar and slicing into wedges. 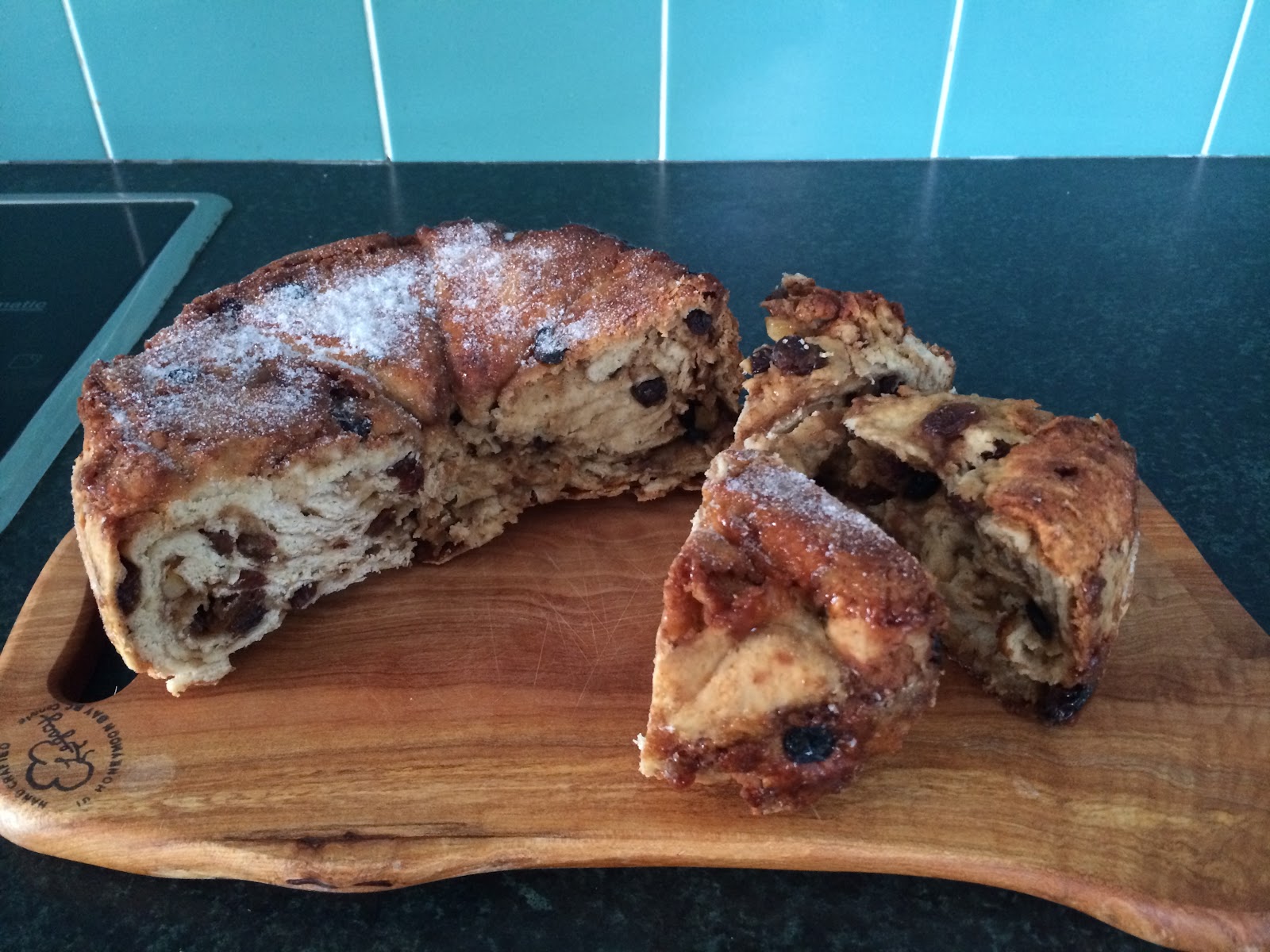