With it being the semi finals of GBBO we were in for a challenge this week...I chose the 20 layer Schichttorte with chocolate and raspberry glaze. Feeling brave I decided to have three separate flavours for my layers - vanilla, raspberry and chocolate. This was mirrored in my glazes - chocolate and raspberry. Just a note, there most certainly isn't 20 layers to my cake...I think I managed to stretch to 16. This is what happens when you realise you only have a 10" rather than 8" tin. Likewise the glaze doesn't quite cover it in full but I think seeing a hint of the layers beneath add to it!

Separate your eggs and beat the yolks for five minutes on high until pale and thickened.

In a separate bowl beat the softened butter and sugar until pale and creamy. Add the vanilla paste and beaten yolks and combine well. Add the corn flour and plain flour and mix.

In a clean, grease free bowl whisk the whites on high until soft peaks form when the whisk is removed. Stir one third of the whites into the batter mix to loosen, then gently fold in the remaining whites.

Share the batter mix evenly between three bowls. In one gently fold in the grated dark chocolate. In another gently fold in ground freeze dried raspberries. Leave the third bowl as the plain vanilla mix.

Preheat the grill to high. Grease your cake tin and line the base with greased baking parchment.

Using approximately 2 tablespoons of one batter mix make a thin layer on the base of the tin. Using a spatula or by gently rotating the tin, spread the batter to cover the whole base. Grill for 3-4 minutes or until golden.

Repeat using a different batter mix and continue to layer and grill until all the batter is used up.

Remove from the grill and cool for five minutes in the tin, before gently turning out and cooling.

Heat the apricot jam over a gentle heat and brush over the cooling cake to seal it. Place the cake onto a rack with grease proof paper underneath.

Make your chocolate glaze by combining the butter, rum, golden syrup and vanilla paste in a saucepan and bring to the boil. Remove from the heat and allow to cool for five minutes before adding the chocolate, stir until the chocolate has melted. Transfer to a jug and once the glaze is at 30C pour over the cake to cover the top and allow to drip over the sides.

In a small bowl mix the powdered raspberries, icing sugar, vanilla paste and milk to form a thick icing. Transfer to an icing bag and drizzle over the chocolate glaze. Decorate with raspberries and enjoy! 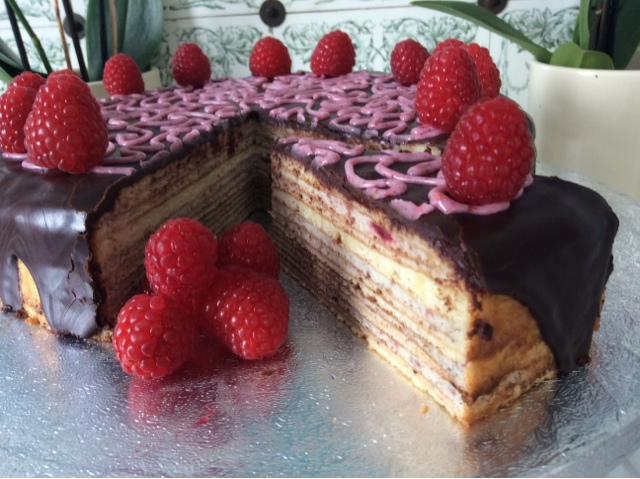