How is it Thursday already?!

After feeling like days were as long as a week in the first trimester, the second trimester seems to be ticking along quite nicely. I don't know whether it's because I've got energy now to do things, or if it's because there's always something going on at home, but each week seems to whip by until I think to myself "well, where did that week go?"

Last weekend we babysat for Sion's nephew & niece on Friday night. They were no problem at all, although Sion was held hostage by a five year old who insisted she couldn't go to sleep until she practised her reading! I wasn't let off too lightly either. When I came to check that teeth had been brushed I had to use my excellent negotiating skills to get them into their own beds and at least pretending to snuggle down ready for sleep...it must have worked though, 30 minutes later one was asleep face down in a book and the other look like they had had a fight with their duvet until they passed out!

I don't quite know what came over me on Saturday, but I pulled everything out of the kitchen cupboards, washed them and rearranged everything. All the kitchen work surfaces were cleared & cleaned and lots of things thrown away. It's made such a difference, although I'm now the washing up police...5 days in and it still looks pretty tidy! 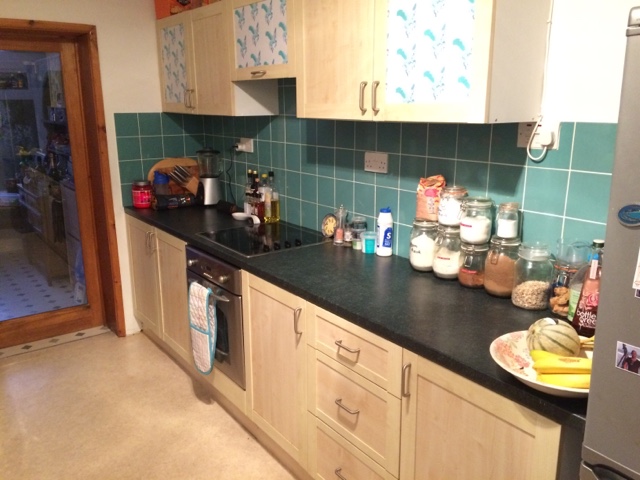 We went out on a date on Saturday night to Mango's Thai Tapas in Southampton for Sion's birthday. He's been working so hard recently, revising for his first set of engineering exams so a nice meal out was much deserved. As usual we ordered far too much, they serve the biggest tapas plates I've ever come across! We were back home again by 9pm but it meant we could relax at home before getting an early night.

On Sunday the cleaning/nesting frenzy continued with the bathroom and soon to be nursery being the next victims. A quick food shop was also done before I popped out to see my friends and their 6 week old baby boy. Sion cooked a roast with amazing potatoes for dinner to round off the weekend nicely.

Baby/bump wise it's been a pretty quiet week. I'm sure I can now feel Hippo moving around, with little fizzes and wriggles that seem to be more noticeable in the evening than any other time. We also had a listen in with our doppler to hear the loveliest, strong heartbeat ever! I'm most definitely in maternity clothes now and my bump is finally more baby than bloat.

This weekend I'll be spending time on Saturday seeing my brother and his family and on Sunday I'm catching up with an old friend and her two boys. I've got two exciting parcels in the post this week that I'm dying to try out, one for me and one for Hippo when they arrive (but I'll have a little play with it before then!).

Hope your weekend is full with lovely things too...next week it's our 20 week scan and I'll be doing a 16-20 week pregnancy post.
Posted by Unknown at 09:27 No comments:

Choosing names for our baby

Sion and I have been pretty set on names for our baby since even before they were conceived! Our choices are traditional but not in the top 20 of children's names and we've both wanted to include family names as middle names, but we have a lot of family each to choose from.

Our girl's choice is now fixed and agreed on and while I liked our boy choice I wasn't blown away by it. Lying in bed at the weekend, I plucked up the courage to ask Sion "are you fixed on (insert name here!) for a boy's name?" This then resulted in the two of us scrolling through Top 200 lists to see if anything else caught our fancy...nothing!! There was one name that I liked, but I was sure Sion wouldn't like it so I kept quiet. It wasn't until later that morning that Sion said "Well I do like (new name) too"...Of course it had to be the same name I was thinking! For the rest of the weekend we tossed both names backwards & forwards, trying to decide which one we liked the best.

Sion went to see his Stepdad and apparently had a conversation where he mentioned both names to him and asked his opinion...His stepdad answered, I like Abraham...Abraham wasn't one of the two options!! Later on he turned to Sion and said what name does Carrie like the most? Sion told him and he quickly replied, that's what you'll be naming the baby if its a boy then!

Of course by not knowing what we are having yet I'm finding it difficult to know what to call baby. We've tried out Little One and Sproglet, but they didn't feel right. Over the last two weeks, my bump has really appeared, so much so that a colleague joked "Are you sure you're not having a hippo?!" Hippo has now stuck, it's going to feel strange calling them something else once they are finally here!

How would you pick a baby's name?
Posted by Unknown at 12:46 No comments:

I can't quite believe that I've made it to almost 18 weeks in this pregnancy. The last 6 weeks have absolutely flown by and I'm now starting to plan those all important baby purchases for the last trimester.

The second trimester seems for the most part to be quite relaxing. I seem to have more energy and for the most part the horrible taste in my mouth and all day nausea has disappeared. My bloat is turning into quite frankly a massive bump already and all my "I'll never fit into that again" clothes have been vacuum packed and put into storage.

I'm not really planning on doing a week by week diary, but I did want to keep some memory of my thoughts and observations throughout this pregnancy - so what did I learn in the first trimester?

DO NOT become obsessed with pregnancy forums or Google, in those early weeks these are not your friends. I joined an antenatal group when I was 6 weeks pregnant and spent the next seven weeks fearfully reading everyone's symptoms, worries and concerns. So much so they became my symptoms. Now I'm in my second trimester the talk is more around Team Blue or Team Pink, or the best pushchair, making for a much more relaxing lunch break!

Everyone is an obstetrics expert! I've had two miscarriages and have a sub septate uterus. The lady sat next to me in the waiting room may well have a different history to me. Someone's sister/auntie/friend/work colleague/wife almost certainly has a different history to me. Just because something happened to them, doesn't mean it will happen to me or won't happen to me. When a pregnant lady talks about what she is feeling, your best response is to nod, offer a hug or to just listen.

Babies on early scan pictures DO NOT look like babies. I've had five scans so far...our baby has looked like a Haribo jelly bear, a fish and a bird. It was only at our 13 week scan that things started looking in proportion. The scan picture still shows baby's arm appearing to come out of Baby's face. If your hospital charges for scan photos your best bet will probably be to only get one. I saw a proud Dad feed in enough coins for 8 scan photos...only to realise that they were all the same image!

If you find a food item that does not make you feel sick STICK WITH IT. Thankfully I only had to deal with feeling nauseous although there were a few close calls when brushing my teeth and a particularly emotional time dealing with a stinky kitchen bin. What I enjoyed one day however was likely to make me feel ill the following day...chicken, ham, cheese, fruit, sweet drinks, milk & tea all fell foul to "morning sickness". My one constant was Salt & Vinegar crisps. One day I ate four packets...and so I just made sure I took my vitamin tablet each & every day. Now I'm pretty much back to eating everything I enjoyed before. One other tip is to try chewing gum if you feel ill. I found if I had any kind of taste in my mouth I would feel ill - chewing gum seemed to get rid of this for me.

Bleeding does NOT ALWAYS mean the worst. I had a number of bleeding episodes throughout my first trimester. It wasn't a little bit of spotting, or light bleeding, but sudden, heavy bleeding with no notice or reason. On three occasions I also passed clots while I sat shaking and afraid at what was happening to me. It was enough for me to bypass calling my GP or midwife and head straight to A&E. Each & every time I would be scanned as soon as possible and there Baby would be, heart fluttering away as it should. I'm not suggesting for one moment that if you suffer bleeding that you shouldn't seek medical advice, of course you should. But until that moment that you are in the room with the sonographer, nothing is certain.

Your body clock will screw up. I work full time and keep myself busy into the evenings and weekends. I thought I knew what it felt like to be tired...I knew nothing until first trimester tiredness hit. I was ready for bed at 11am, perked up again early afternoon and then kept myself awake for long enough to eat dinner before curling up on the sofa with a duvet for the evening. I remember turning to Sion one evening and saying proudly to him "I'm feeling quite sprightly tonight, I must be coming out of the tiredness stage". It was 7:20, I was asleep by 7:45. Normally I'd be awake for 16 hours, asleep for 8...pregnant this flips on it's head!

The person who knows your body and symptoms best is you AND YOU ALONE. If you don't feel right, ask a professional for advice. If you feel like taking it easy, take it easy. If you feel like cleaning the bathroom, before tackling the washing and squeezing in the food shop come round to my house.

Most of all I've learnt that the human body is an incredible thing. I can't believe that we have been able to produce this little being, currently growing away. Despite all my setbacks in the past I've seen our baby wave to us, heard their heart beating and felt their first subtle, tiny flutters.

Hold tight Little One, we can't wait to meet you. 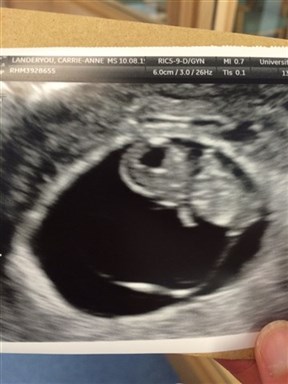