This week marks a very special point in the life of Baby B. She is 40 weeks old - 40 weeks in me, 40 weeks out of me, so I thought it would be a perfect time to record some of my favourite images of her and the memories I have of those times.

Of course I had to include my final bump photo. We took this on a warm summer's evening the night before B was born. I remember telling Sion to make sure not to show my feet! I suffered with swollen feet so badly, my ankles disappeared around 28 weeks and even flip flops left deep indents towards the end. Looking back my bump was HUGE, but I loved it...I think that's something that I really miss about pregnancy - the little strokes I gave B throughout the day and the little wriggles and kicks she gave back. We had a lovely meal that last night, of medium steak and a glass of champagne, soaking up our last night as two...and still trying to think of boy's names!!

Next to it B at the weekend, looking so big and grown up in her highchair - yet still needing a towel underneath her as a booster cushion! The new favourite is crumpets loaded with soft cheese or marmite and always her own spoon! she's not quite able to feed herself so we distract her with a spoon and quickly slip a loaded spoonful into her mouth. We always listen to music when she's eating and just this last week she's started to adorably bop up and down when she hears something she likes.

Oh my, those first few weeks were a blur of trying to feed Baby B, trying to feed ourselves and so many tears from us both! Baby B was born via C section on 15th June 2016 at 9:25am. We had found out the week before she was breech and because of my subseptate uterus, external manipulation was not an option. Unfortunately she was completely squashed up in there and the consultant struggled to deliver her. She was given help with her breathing and it was 7 minutes before she took her own breaths - the longest 7 minutes of my life. Once we were back in recovery she fed for an hour then slept for four...we thought she was the worlds easiest baby!!!

She was born during last years heat wave so the first few weeks were spent indoors in just a nappy playing with her toy octopus.

At 10 weeks old we started going to a baby sensory group once a week. B loved the songs, I loved dressing her up! We got our first smiles in this time which made up for the horrendous battles we had with reflux. At one point poor B was on four types of medication, all giving awful side effects and not really managing the root issue of her awful pain. As our consultant explained, despite all the medications the only thing proven to cure reflux is time. Unfortunately for the eight weeks that she really suffered with symptoms she put on less than a pound in weight. She's never really caught up and is still rocking the 3-6 month clothes, despite being 9 months old!! I found this time really difficult, to the point that I was prescribed anti-anxiety medication. This really helped me, as did talking to my other mum friends and family.

This was when I actually started to enjoy being a mum! We went to CenterParcs, just the three of us. B learnt to fall asleep by herself even without a dummy (she has one again now though!!) and she really started to interact with people around her. We went to Cardiff to watch Wales play international rugby. She watched fireworks, military bands and thousands of people without crying once...she even got a little nap in during the second half!! It was around this time that B started to pick objects up and play with them. Her favourite place was in her chair with us in the kitchen, watching what was going on!﻿﻿

Unfortunately we didn't get one photo of us on Christmas Day - such a parenting fail! B had a nasty chest infection the week before Christmas and ended up being admitted to hospital. she came home on the Wednesday before Christmas and so still wasn't quite right over the holiday season. She did start to get her appetite back and finally ate something other than baby porridge...Weetabix!! It seemed to be a hit and she soon moved onto pureed sweet potato & parsnips.

We spent a few days on the Isle of Wight with B's cousins, taking lots of strolls along the beaches and catching up on sleep!


And so here we are up to date. Recently B is sitting confidently by herself, no sign of crawling or moving yet and most definitely no teeth, despite teething since November! She now loves to sit in the trolley whenever we go shopping and loves being in a swing at the park. She babbles away with Dada and Nah (no) her first words. I'm sure Mama isn't far behind! B loves spending time with her childminder every day when I'm at work, she is coming on so quickly now she spends time with other children and in spite of working full time I'm finding parenting just that bit easier.

If I have one piece of advice for any mum (or dad) who's struggling a little it would be "remember it's just a phase, it might be a longer phase than you were expecting, but you will get through it!"

Now when are those teeth going to make an appearance?!!

Email ThisBlogThis!Share to TwitterShare to FacebookShare to Pinterest
Labels: Baby B, parenting, pregnancy, Time to PARENT 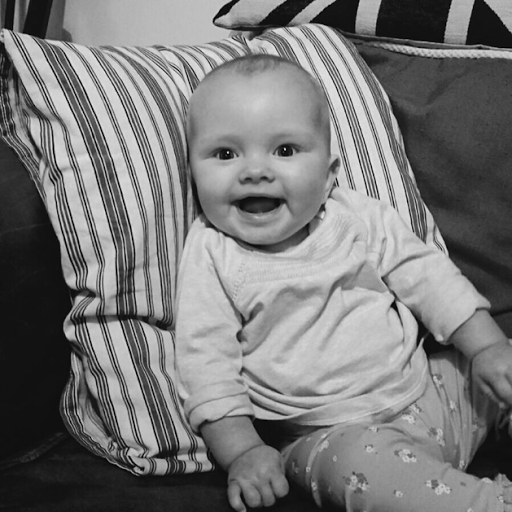 On a traditional calendar 11 months have passed, but to one person it's been a whole lifetime, my daughter Baby B arrived safe and well in this time. She's now nine months old. In some respects she changes every day; learning, growing, interacting with those around her, yet in other respects she is exactly the same as the day she was born. Her hair has the same mohican quiff she rocked on the day she was born; she still turns her head to the side seconds before she drops off to sleep, exactly as she did when I stayed awake for the whole of her first night in earth.

To me at times it's like only a moment has passed, like a dream that speeds by in the seconds before you wake up. I'm back working full time in the job I was doing before my maternity leave. We are still living in the same house, abet with far more plastic stuff that plays annoyingly loud tunes. I'm even on occasions given the chance to get a full nights sleep as the night feed starts to drop off.

And yet in other aspects life has changed beyond recognition...we were two, now we are three; we were boyfriend and girlfriend, now we are engaged; we were living in rented accommodation, now we are (fingers crossed) about to become home owners. Every decision we now make is not what's best for us but what's best for Baby B.
Posted by Unknown at 20:52 2 comments: